March and April have been busy months for Architects and Engineers for 9/11 Truth! In addition to launching Operation Tip the Planet, the first global, transmedia 9/11 Anniversary event, we educated audiences in Nevada and Georgia about the 9/11 evidence and met with experts featured in our landmark documentary, 9/11: Explosive Evidence – Experts Speak Out. 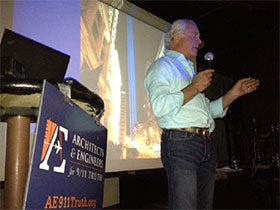 Metals expert Gery Werner, P.E., shares his insights into the molten iron seen flowing from the South Tower on 9/11 with the Las Vegas audience. You can watch his compelling testimony in 9/11: Explosive Evidence – Experts Speak Out Our vital message also garnered the support of influential political candidates and was broadcast live on TV. Here are some of the highlights from our latest live presentations and interviews.

Las Vegas can thank AE911Truth supporter and volunteer James McCabe for performing over-the-top service to this community – one of the regions hardest hit by the recession. Like the rest of the world, Las Vegas is also recovering from 9/11, one of the most massive manipulations the world has ever seen – which is why McCabe brought AE911Truth founder Richard Gage, AIA, to present our landmark talk, 9/11: Blueprint for Truth – The Architecture of Destruction…

The NIST WTC 7 Report is False

Why the NIST report on the WTC towers is false

Rockets at the WTC by David Chandler – Arabic

The International Translation Team of AE911Truth Speaks Out – German

NO PLANES ON 911 EXPOSED by FOX NEWS Expert Interviewee

9/11 WHAT REALLY HAPPENED ?? See with your own eyes